Anatomy of a Spanking Illustration

Awhile back, I received a request to do a step-by-step demo on producing a color piece. I thought I would just email it to them, but they said, 'No, no. Post it on the blog!'. I didn't think very many people would be interested - but they argued that, for those who aren't interested in the process, they can just scroll down to the finished piece.
Fair enough. If you aren't a fellow art geek, then scroll away. For those of you who are, I hope this little demo inspires you in your own efforts.

First, let me state emphatically that I do not consider myself an accomplished digital artist worthy of teaching others. If you really want to learn digital painting, there are plenty of online resources. I am too impatient to wade through them, so I just wing it. So consider this a demo of what even an amateur can do with the right software tools - I use Photoshop, almost exclusively.

I prefer to do the initial sketch in pencil on paper. However, I find cleaning up my scans and fixing the grain in the linework once they've been transferred to the digital realm such a pain in the ass that - well, let's just say not every pain in the ass is to be savored.

Most of the time I draw from an image in my head, but for this demo, I was inspired by an old photo of dancer/actress Barrie Chase I found on Tumblr. I liked the silhouette of her pose, and infused a little imagination to make it more spankocentric: 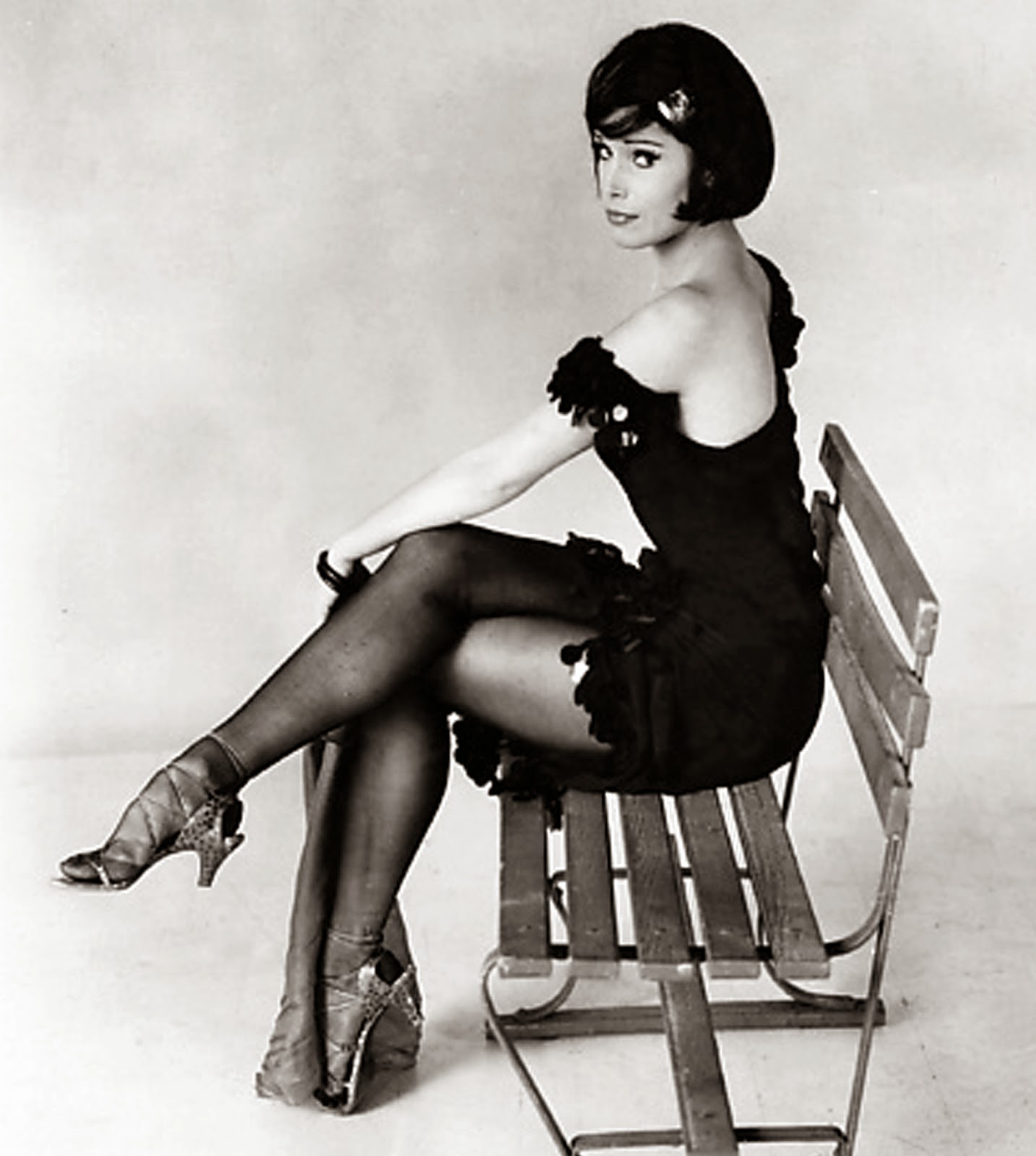 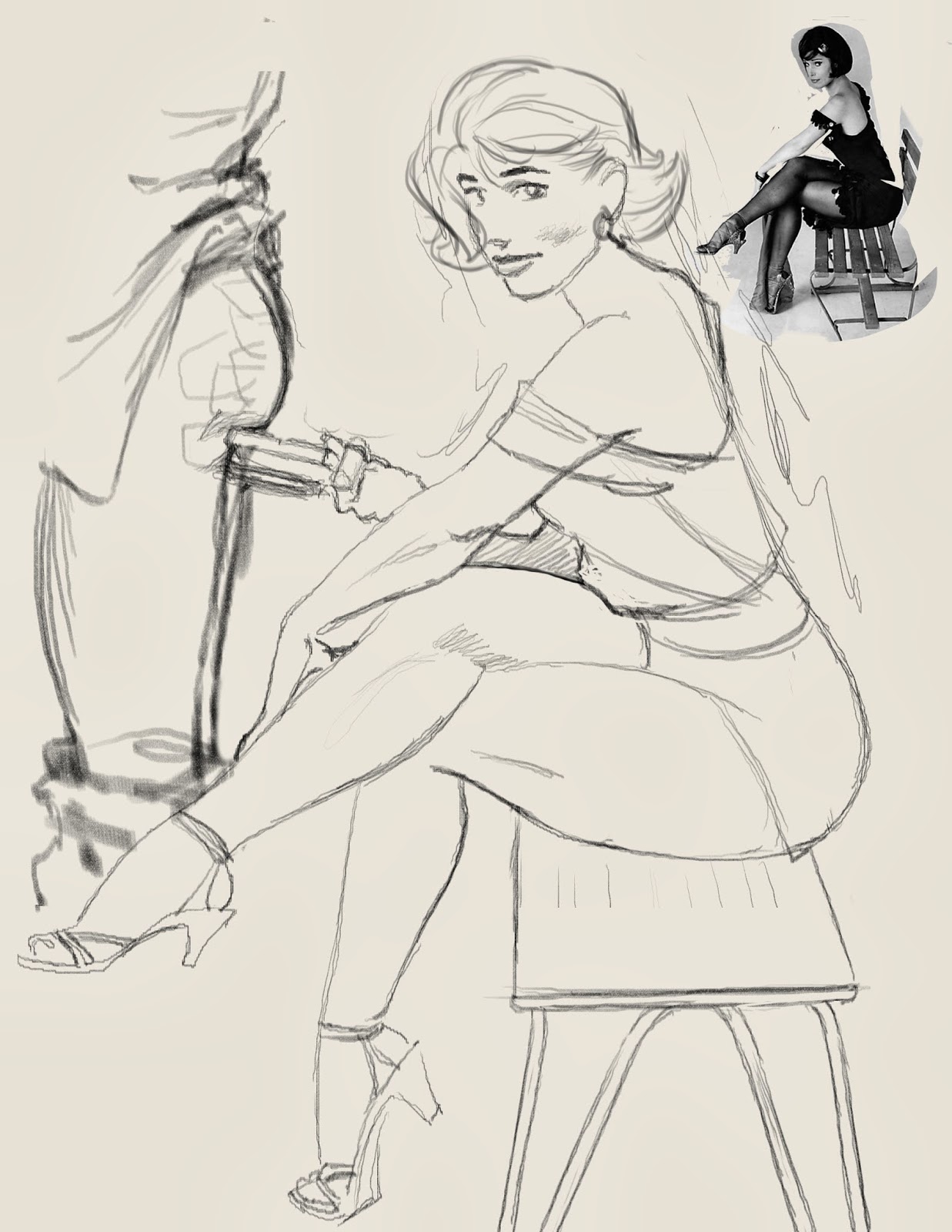 Because I like the women and the illustrators out of the 50's and 60's, I am inspired by the look of the illustrations from that era. Illustrators back then were not afraid of linework showing in their final piece, but they were selective about it, so I decide at this point that something of the line drawing will survive to the end. 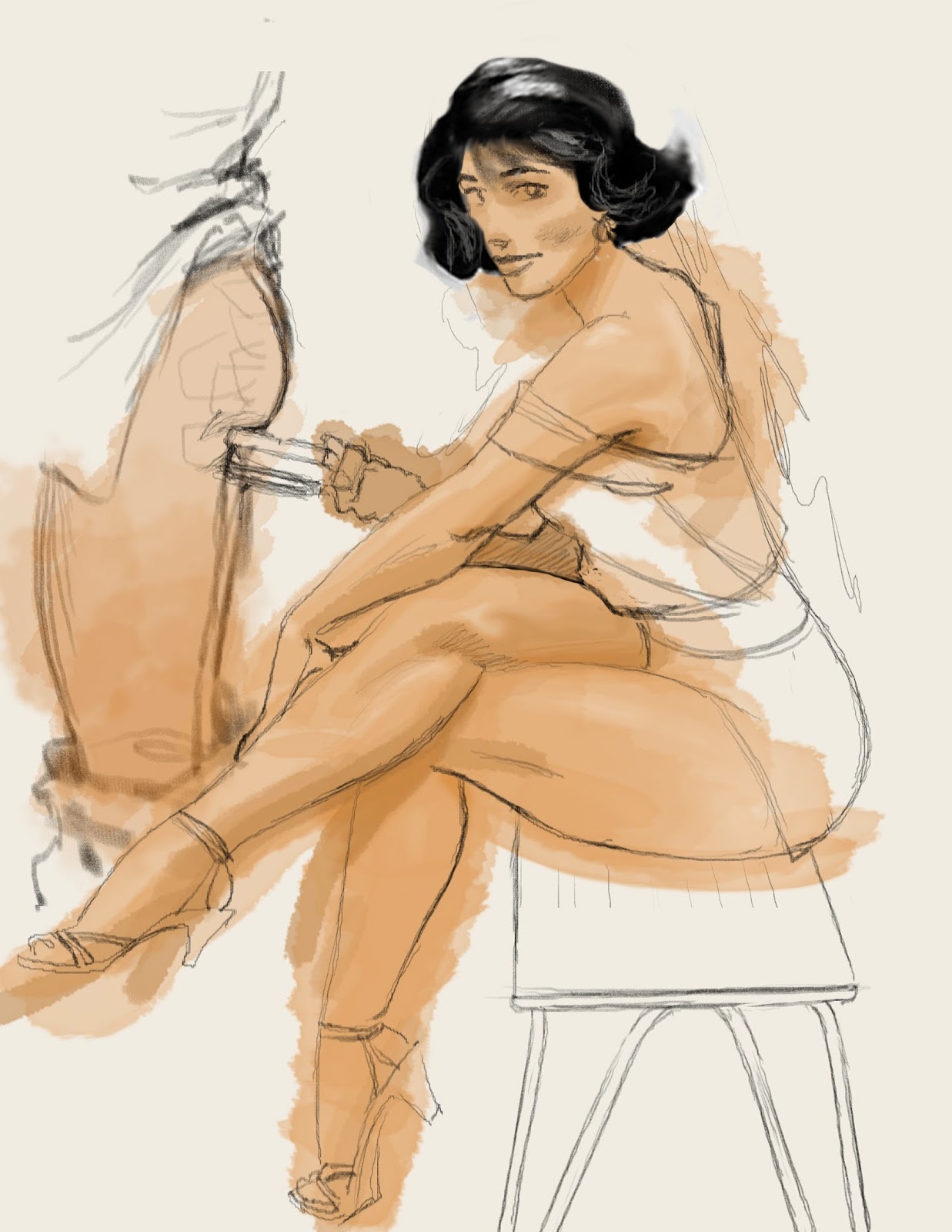 So let's start with some basic washes of color to get the tonal values established. Not too worried at this point about edges. That can all be cleaned up later. I use the skin and hair tones to guide all the other values and colors, so blocking them in is the first task. 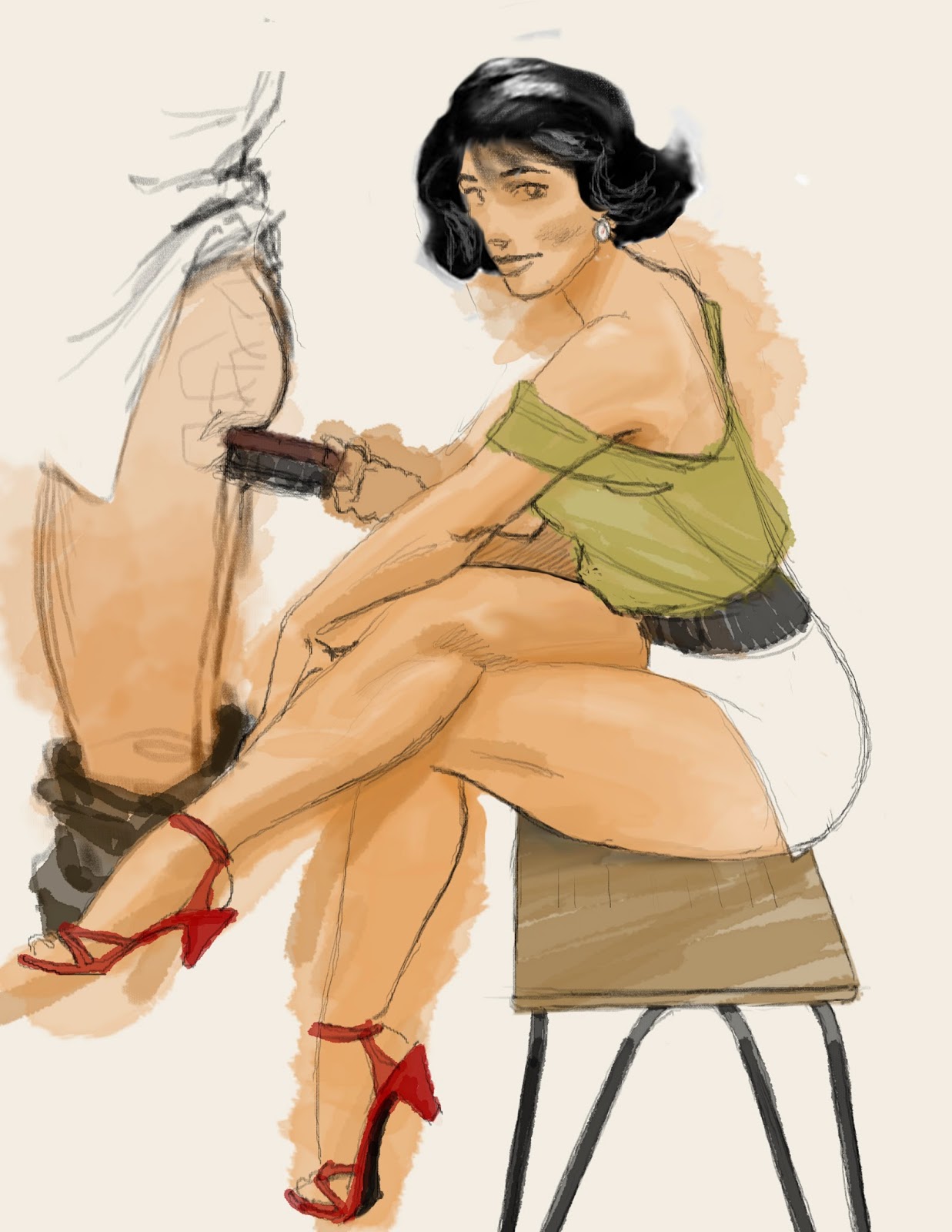 Now some other colors can be blocked in, careful to avoid ones that will overwhelm the flesh tones. The shoes are a little intense, but that's ok - I know that they will eventually be balanced by the redness I will be adding to her hubbie's backside. 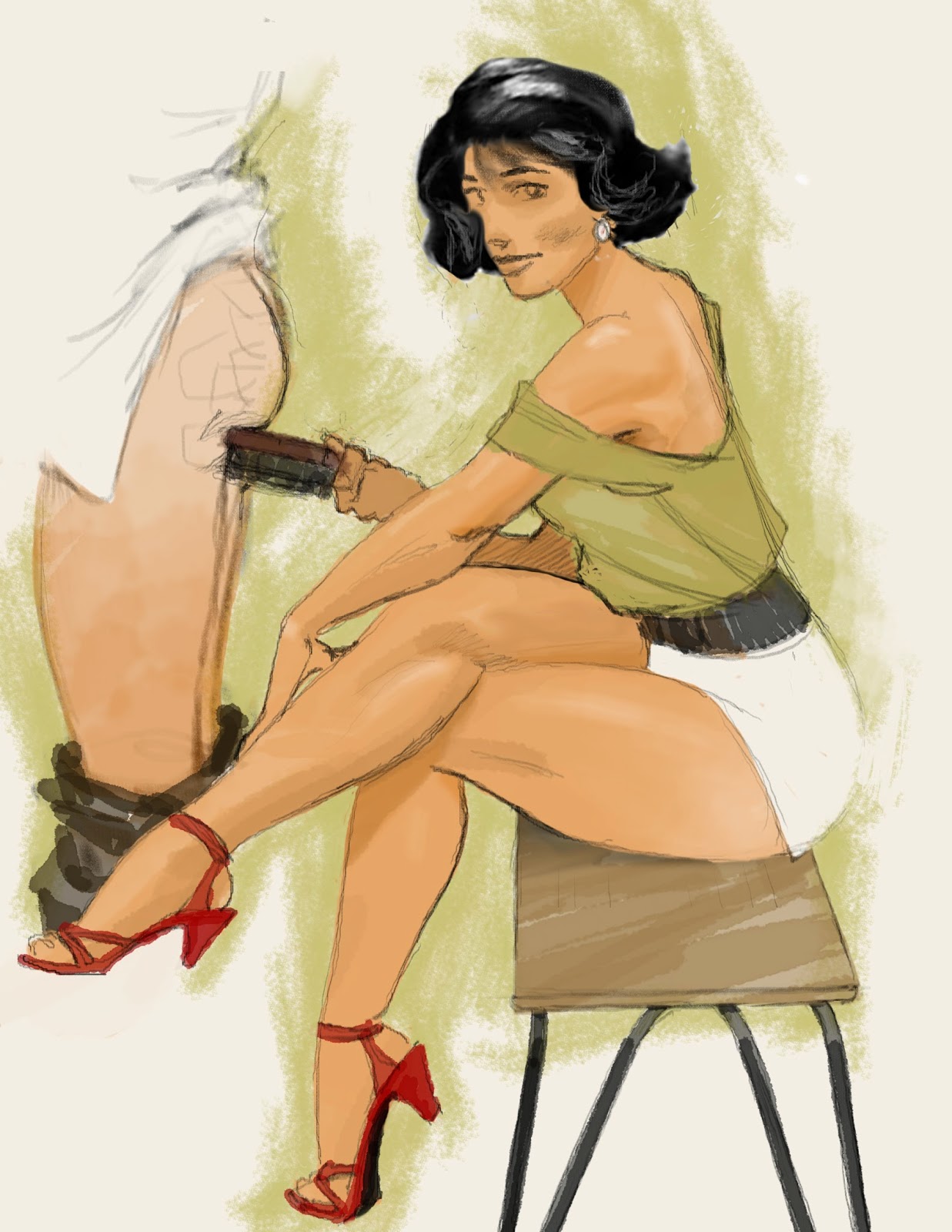 At this point, I decided to add a 'halo' around the edges, both to add a little visual energy, and allow her shorts and his shirt to read even though they are the same as the background (another trick of the old illustrators, letting some part of the foreground unpainted so the background shows through). 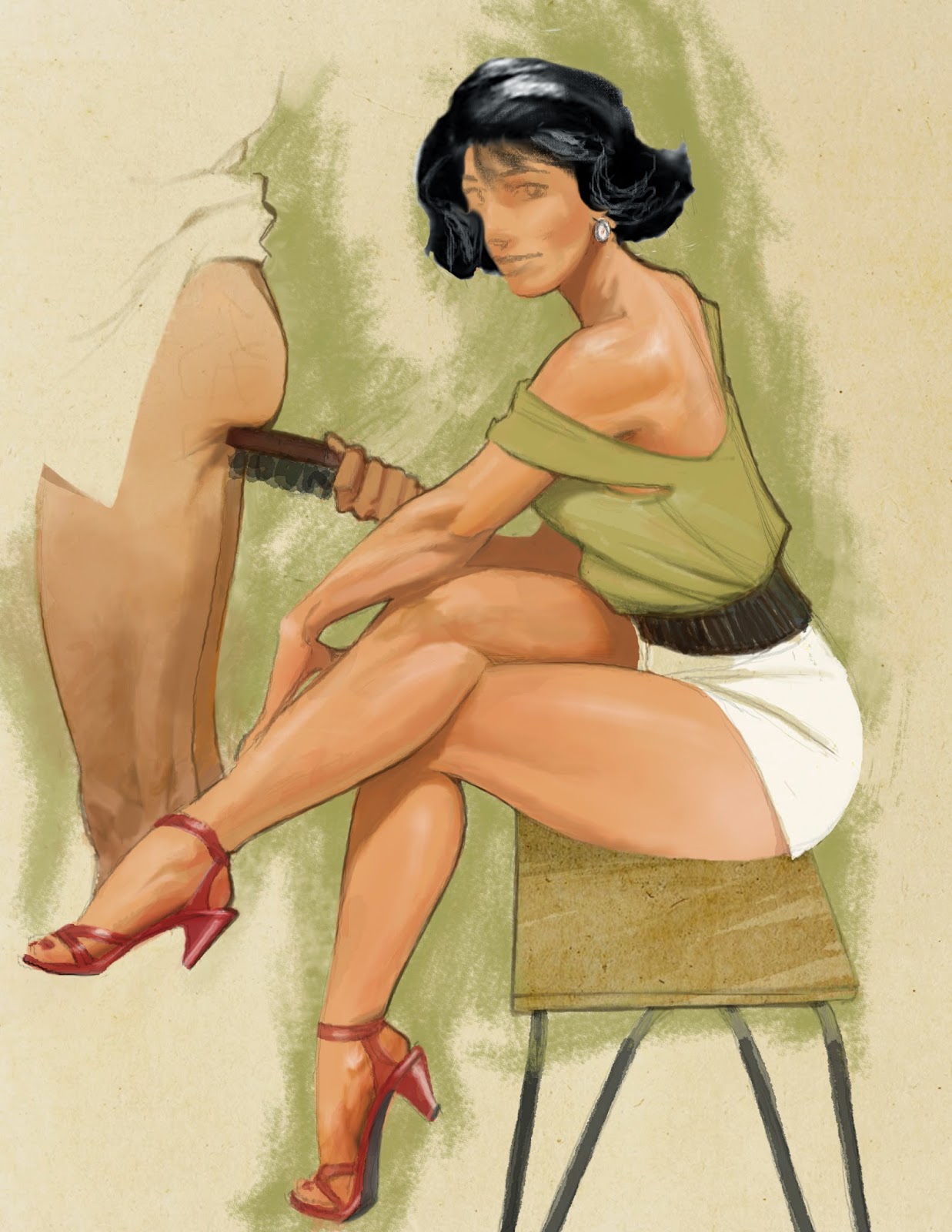 On second thought, I abandoned that idea in favor of making her shorts 'pop'. Tight white shorty shorts are just too delicious to be allowed to melt into insignificance! So I added a muted color to the background, and reduced the saturation of her shoes.  I also started refining the muscle shapes and highlights. The finished piece is starting to reveal itself now. 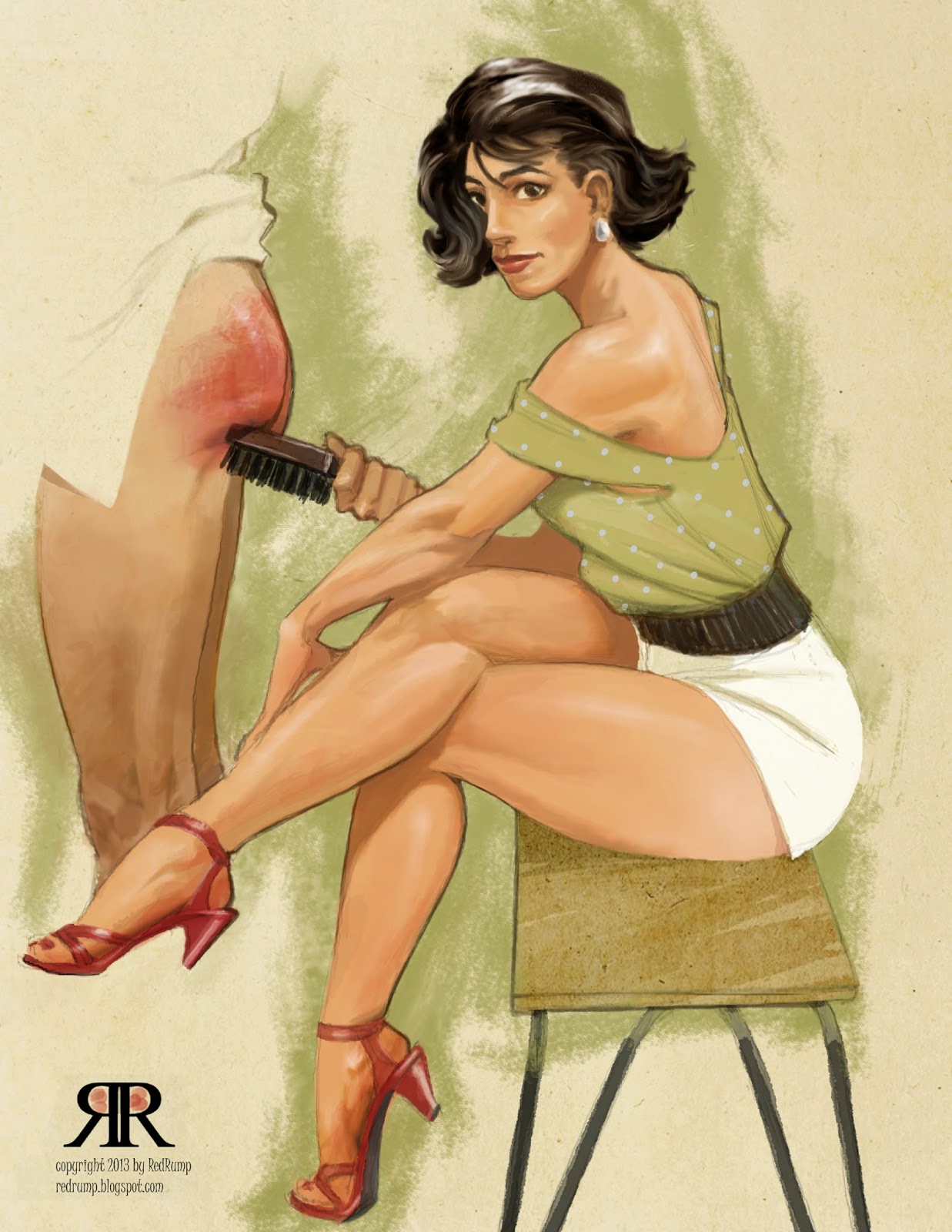 And we're done. A wife displaying her own artistic brushwork. You'll notice the linework is still there, but has been removed in areas where two surfaces are in contact (her thigh on the bench, or her elbow resting on her knee). I usually leave the face and hair til the last, simply because they are the most expressive element, and if I do them first, then my natural laziness might lead me to hurrying the rest. I try to get some type of expression on the face in every drawing, even if its just a subtle one like here. Even nuances of expression can say so much. I see a lot of spanking photos on the net where spanker and/or spankee  just look bored to death. I suppose the spanker often thinks she is looking stern, but it often does not come across that way.

My good friend Penny Hasler over at Naughty Little Writer invited me to join in on a 'blog hop', wherein bloggers in a particular genre - in this case, writers of spanking fiction - answer a series of questions. In my case, she thought it would be fun to include an artist in the mix.

Now, Penny being the sweetheart that she is, how could I say no?

I've learned that it's not usually a good idea to say no to Miss Hasler. She knows how to give a right proper scolding and is just as good at swinging paddles as she is at stopping them with her butt.

So here are the questions I'm to answer:

What are you currently working on?

I usually have a few pieces on the go, in various stages of completion. One is a color piece with a breakdown of how I develop an illustration from start to finish. That should be up soon. As well, there are a few rough sketches of caning scenes, and maybe a new babysitter illo (big surprise, huh?)

How does your work differ from others of its genre?

The only deliberate decision I made in approaching this genre is that I wanted my illustrations to read with an instant clarity - that is, bold shapes based on principles of visual dynamics I've picked up over the years. Thus I make only occasional use of backgrounds, which I find compete with the character shapes, and also swallow up a lot of valuable time! Beyond that, I don't make a conscious effort to make it look any different. In fact, I too often try to emulate styles of artists I admire - and usually fail. The way I naturally depict things usually just insists on asserting itself. Not a bad thing, really. What's the point in being a second-rate somebody else, anyway?

Why do you do this FM spanking art thing at all?

'Cause I like it. In the beginning, it was rather liberating to share my personal fantasies with the world. And I was delighted to find others who shared similar fancies. Now, coming up on three years later (!), that initial kick has diminished considerably, and it's about the art itself, constantly striving to improve.

How does your process work?

Usually, it begins with a scenario in my head, then a coffee and a flurry of  'stream of consciousness' sketches, most of which are unintelligible (except to me). The goal is to hit upon an angle or pose that captures the spirit of the scenario. If I don't succeed, I bank the sketches for a future try, or if I do, it's time to get serious about the final image. I used to draw everything on paper, but lately I've been experimenting more with digital 'pencils' in Photoshop, with varying success. The breakdown I mentioned above will explain the painting process in more detail.

I hope that answers your questions, Miss Hasler. Thanks for including me in this little cross-blog venture, even if I am not among the cadre of  literary kink-inkers.
1 comment:


Hello. Remember me? Name's Red Rump - though I have been so busy lately, I'm afraid I am not living up to my name very well. I could use a good rump reddening, but I guess I'll just have to settle for dreaming of trading places with this poor sot... 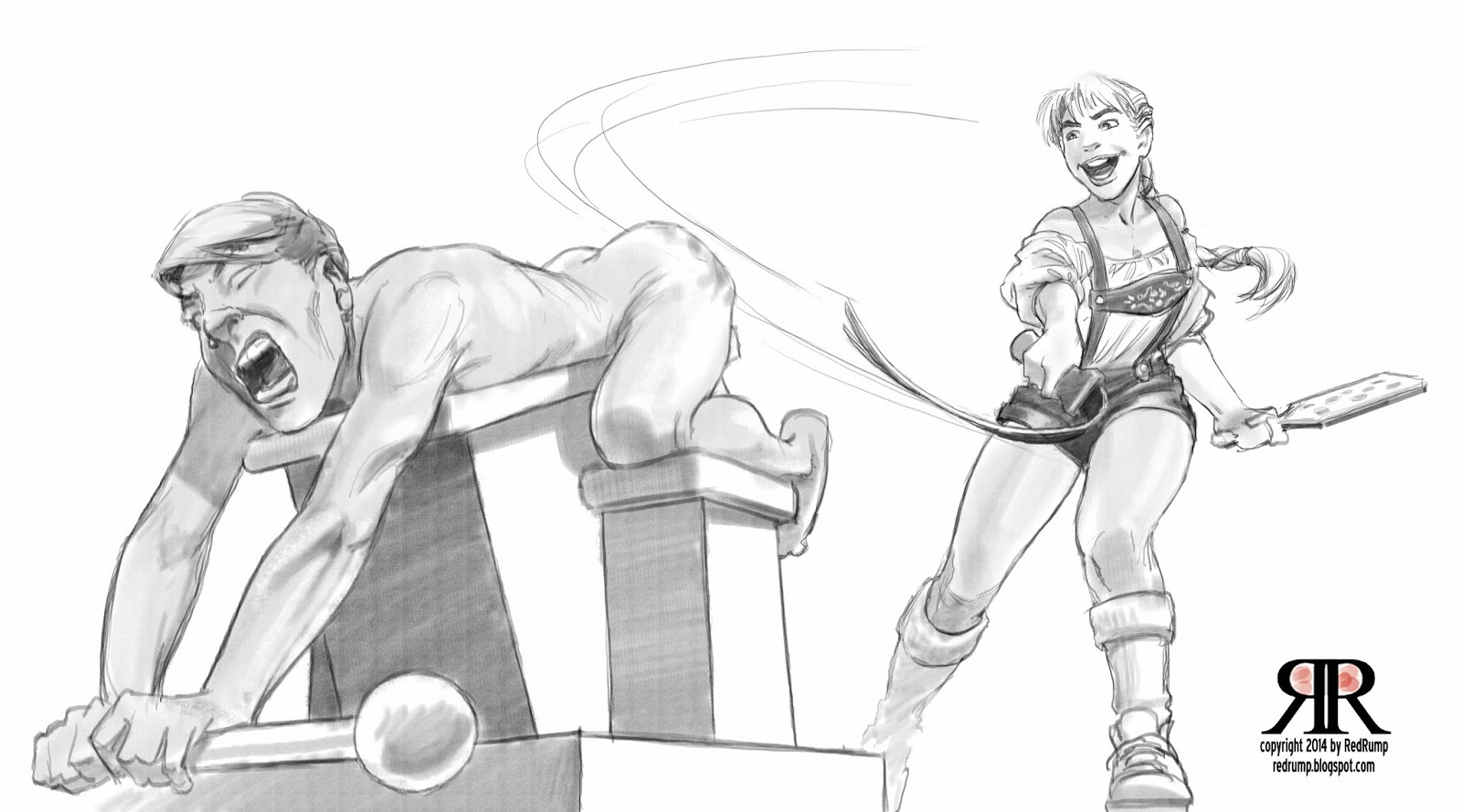