The Office of Correctional Services, Pt. 12 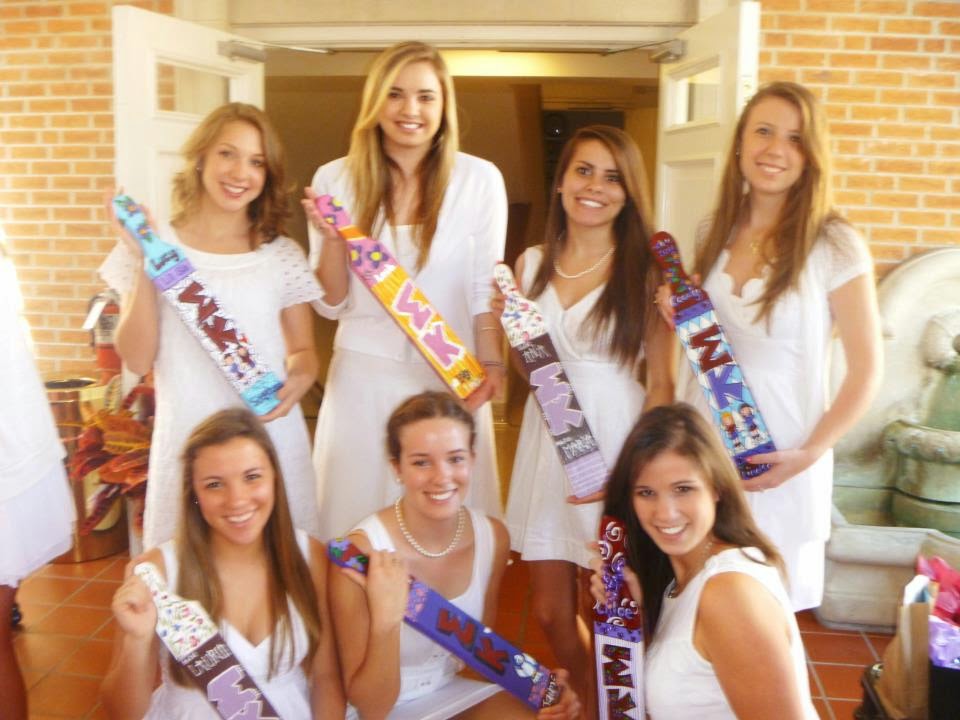 Well, after a lot of hemming and hawing, I decided to take the plunge and submit to the initiation for Delta Kappa Phi. Originally, I was desperate to belong to a sorority – any sorority – but working with Ms. H has given me a new confidence I never knew I had. I don’t really feel like I need to depend on others for my self-esteem as much any more. It’s perhaps the greatest benefit of the lifestyle she has inadvertently introduced to me.

So why, then, would I decide to join them? I suppose it was strictly for the experience of the initiation rites. It is a very kinky concept, really, the idea of a bunch of young women gathering together to gang up on one, and beat the hell out of her, all the time giggling and laughing about it like a gaggle of elementary school girls. I suppose a psychologist would say there was a healthy dose of subliminal lesbianism going on there, or that the violation of the initiate’s buttocks by a paddle is somehow symbolic of rape, or some such crap. Personally, I just needed to do this to try to better understand the submissive experience so, as a dominant, I can better play into that mindset. You know me – I can’t do anything halfway. I suppose I could have just gone to Ms. H and asked her ‘initiate’ me, but frankly, I’m still too intimidated by her. I think I would chicken out, and  I would not want to disappoint her. So I figured that it would be easier offering my backside to a bunch of giggling amateurs.

Well, as it turned out, I seriously underestimated them. I am an artist, and they say a true artist must suffer for their art, but holy crap! Tessie, it hurt SO bad. I never dreamed a simple plank of wood could inflict such pain. They made me strip down to my bra and panties, then screamed obscenities in my face for half an hour, then made me bend over a high stool and plead with them to paddle me to tears.

The head girl, Emma, took the first swing, and I fairly shrieked. If I’d been smart, I would have given myself a treatment with a hairbrush prior to this whole business as a warm-up, to desensitize the skin a bit. But, no, I didn’t think to do that. People think that the longer a beating continues, the more it hurts. But I discovered that the first strokes applied to an unprepared rear are the most painful. The flesh is at its most vulnerable and sensitive. I think my yelp surprised them all, but it did little to dissuade them.

Emma handed the paddle to another girl, Anita, who leaned down and whispered to me that her boyfriend had an appointment in the OCS last fall, and he told her how mean I’d been to him, and that I’d even taken the liberty of ushering him out of the office with a sharp butt smack after his punishment. (Yeah, I started doing that). Now she was going to take his revenge for him.
Then she wound up as far back as she could reach and walloped me as hard as she was able. She let me have a dozen and I was beside myself by the time she’d finished. I had tears in my eyes and I don’t think I had ever known such pain. I was not allowed the simple consolation of rubbing my bottom. I was told to stand, then kneel down and kiss Anita’s feet, apologize for how I treated her boyfriend, and thank her for teaching me a lesson.

It was humiliating, but the compulsion to obey and submit was surprisingly powerful. I was angry, ashamed, and somewhat in awe of Anita standing there, tapping that wickedly cruel paddle on her leg. Needless to say, I did what I was told.

Then Emma announced that the initiation could begin. I turned white, appalled. I thought it was over! But, no, that first beating was an indulgence at Anita’s request. I had had nothing to do with the usual initiation. Now a whole tray of paddles was wheeled out, and the ten girls there each took one. They formed two lines, and I was told that I would have to pass down the line between them, bending over for each pair, ask them to let me have it, thank them, and then move on.

Emma then told me I could quit now, if I wanted. The voice of prudence inside my head agreed. I had taken a sound paddling – in that sense, I’d achieved what I set out to do, so why put myself  through more agony? I don’t know, maybe it was the wicked smirk on their faces that got my gander up, made me refuse to admit they had defeated me right from the start. The story would get around campus that Lindsay Ashcroft of the OCS was quite willing to dish it out to whatever poor sot entered her office, but couldn’t take it.

I sniffed back my tears and entered the gauntlet.  It was withering painful and equally as humiliating, but I played my part to the letter, bending and pleading and suffering and thanking my way down that line, proud as sin every time I swallowed the desperate urge to howl, or stood up to take on the next pair of paddlers. They each got two swings at me, so in total I got twenty more swats, on top of what Anita had delivered me earlier. When it was done, I could hardly stand, my knees were shaking so bad, and my jaw was quivering with stifled sobs, but I stood and faced down Emma as she walked up to me, hugged me and welcomed me to Delta Kappa Phi.

I was far more proud of having endured the ordeal than being awarded my membership. It took me a full five days before I could sit with any reasonable comfort, but looking back on it, I am glad I did it. It was certainly one of the most profound experiences I’ve ever had, and I think my self-esteem is actually higher than before, knowing I have the strength to take a walloping like that.

Still, I think I’ll stick with the other end of the stick.  It’s a lot easier getting a good night’s sleep afterward.

Not much time for blogging lately, but I stumbled across this beautifully executed piece on a vanilla blog, and just had to post it. It was done for the French magazine La Vie Parisienne, circa 1922. 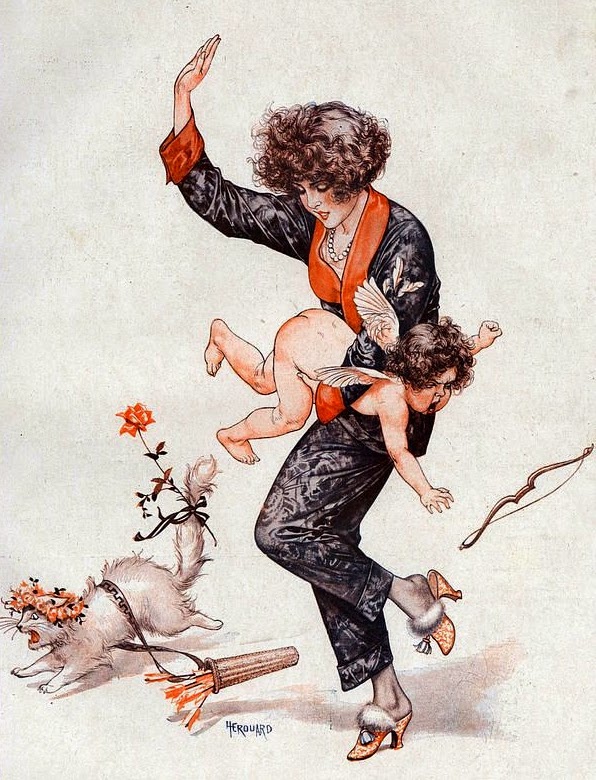