The following is a new avenue for me, a foray into spanking fiction which has its origins in reality - well, sort of, anyway. The story is dedicated to the wonderful Penelope Hasler, who is both the inspiration and the 'star'. Back in March, she portioned out to me a very thorough virtual paddling that had me all agog - you can read it on her blog here: I'll Give You a Red Rump, My Boy! (it's in the comments section, but be warned - it WILL make you jealous). Further, she promised I was in for the real deal if we ever met offline, so this is my fantasy on how that encounter might play out. Without giving much away, I can tell you that I do not fare particularly well in it...
My sincere thanks to Penny for allowing me to turn her into Miss Hasler, and for proofreading the story and fixing all my errors - 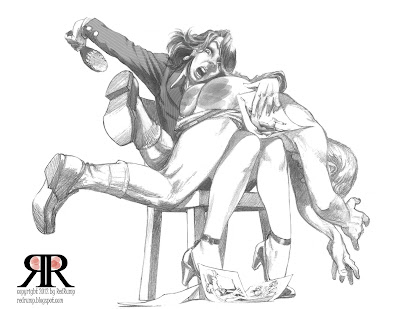 I tried - really, genuinely tried - not to wriggle and squirm away, but Penelope had a knack of delivering each swat to an unexpected spot, always keeping me on edge. I couldn't predict where the next would land, so I could not mentally brace for it. All I could do was try not to clench, which would only concentrate the impacts and cause deep bruising. A particularly severe blow to a patch of previously untouched skin on the outer edge of one buttock evoked a heartfelt yelp of pain that I think startled even her, for she put down the brush.
"Really, RR, I didn't think you would be such a cry-baby about this. I thought you liked getting your rump reddened. Or was it all an act? Is your mouth bigger than your bottom?"
I set my jaw and felt a stab of indignation myself. "No, Ma'am. I need my rump reddened. Please don't stop."
She took up the spatula. "Who said anything about stopping?"
The silicone spatula had a small blade and did not deliver the same 'punch' as the wooden hairbrush, but Penelope had a technique that made up for the difference. She chose a spot in the middle of my left cheek, and built up a series of targeted swats there, beginning with light taps, but each a bit harder than the previous one, until she was laying it on as hard as she could. Then she chose a new, fresh patch somewhere else and began again. This method had me in some genuine distress after half a dozen or so directed pastings, so that I was murmuring desperate little gurgles and gasps.
Relax, the voice said. Don't resist. Let the pain flow out and wash away. Don't try to hold it in.
During the next several minutes, I ascended to that state of mind where the mind deceived itself into interpreting the pain as pleasure. I glanced back up over my shoulder to watch admiringly as Penelope raised the spatula (so high!), then brought it down in a blur with a resounding CLAP!. I winced, shuddered with delight and exhaled a deep sigh of joy. This was where Red Rump belonged, over a woman's knee getting a well deserved, good old-fashioned spanking. I felt like a kid again, getting that licking that I should have had from Brenda.
We were approaching that time when the spankee's bottom was rapidly numbing and the spanker's arm was starting to give out. Looking down to see the blissful smile on my face, Penelope realized it too.
But if I thought I had won, I had another think coming...

Stay tuned for Part II, when Miss Penny gets serious...